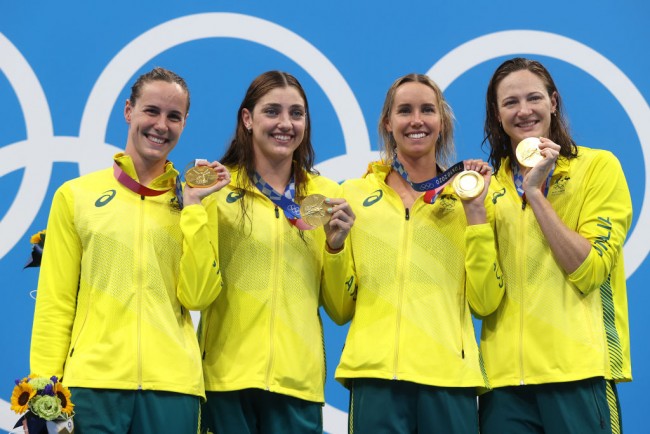 Among the 10,305 athletes that competed in the recently concluded Tokyo Olympics, a few stood out for their herculean feats during the Summer Games. Here’s a breakdown of the world record feats made by athletes in Tokyo on their way to winning the coveted Olympic gold medal.

Warholm, Rojas, and McLaughlin stand tall in track and field

Three athletes in the sport of athletics stole the show in Tokyo with their world record feats. Venezuela’s Yulimar Rojas got the ball rolling in the women’s triple jump, posting a new world record with a leap of 15.67 meters, surpassing the mark set by Ukrainian Inessa Kravets in 1995.

Karsten Warholm captured the imagination of fans everywhere with his stunning run in the men’s 400-meter hurdles, finishing with a time of 45.94 seconds, breaking his own world record by 0.76 seconds. Warholm became the first man to break the 46-second mark in this event.

Sydney McLaughlin then broke her own world record in the final of the women’s 400-meter hurdles, finishing with a time of 51.46 seconds to win her maiden gold medal for Team USA.

World records also tumbled in the sport of track cycling. The Germans broke the world record in each round they competed in the women’s team pursuit, showing their dominance in this event. They won the gold medal in style, beating defending champions Great Britain comprehensively with a time of 4:04.242.

Aleksandra Miroslaw displayed tremendous speed and agility in sport climbing, posting a new world record in the women’s combined event with a time of 6.84 seconds.

Six world records were broken in the sport of swimming at the Tokyo Olympics. Two of those came in the men’s events, with the Americans posting both records. Caeleb Dressel broke the world record in the men’s 100-meter butterfly final, finishing with a time of 49.45 seconds to win yet another gold medal.

Dressel then teamed up with Ryan Murphy, Michael Andrew, and Zach Apple to win the 4×100-meter medley relay for Team USA, finishing with a world record time of 3:26.78.

Australia stamped its class in the women’s 4×100-meter freestyle, with the foursome of Bronte Campbell, Meg Harris, Cate Campbell, and Emma Mckeon breaking the world record with a time of 3:29.69.

It was China’s turn to break the world record in the women’s 4×200-meter freestyle, with Yang Junxuan, Tang Muhan, Zhang Yufei, and Li Bingjie finishing with a blistering time of 7:40.33.

Tatjana Schoenmaker then swam the race of her life in the women’s 200-meter breaststroke, finishing with a time of 2:18.95 to win the gold medal for South Africa.

Team GB also had a world record in the mixed 4×100-meter medley relay, with Kathleen Dawson, Adam Peaty, James Guy, and Anna Hopkin finishing with a time of 3:37.58.

Four world records were shattered in the sport of weightlifting, all of which came in the men’s division. Shi Zhiyong broke the world record in the 73-kilogram category, lifting a total weight of 364 kilograms.