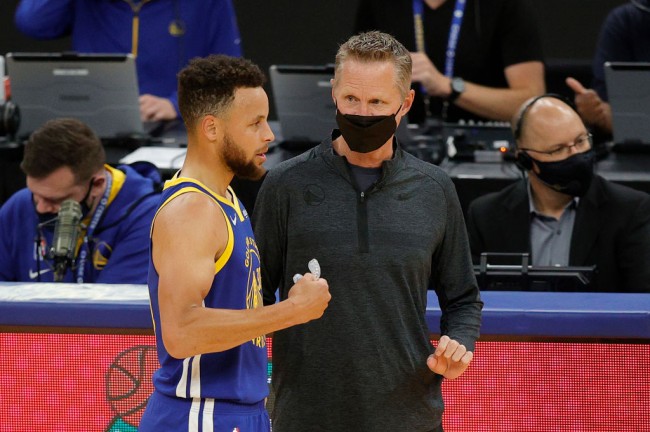 Steve Kerr and Stephen Curry have formed one of the league’s best player-coach relationships in the NBA, winning three championships together with the Golden State Warriors. Kerr wants to replicate that partnership in an Olympic setting with the 55-year-old coach aiming for them to join forces for Team USA in the 2024 Paris Games.

Kerr made no qualms when talking about the head coaching position for Team USA in the 2024 Paris Olympics, telling The Athletics‘s Tim Kawakami that he’s throwing his hat into the ring for the dream job.

“Of course I’d be interested. I mean, who wouldn’t be? I’ll leave it at that,” said Kerr.

Kerr added in the interview that it would be an honor for him to be considered for such a position. Kerr has been a mainstay for Team USA in recent years, serving as an assistant to head coach Gregg Popovich.

Their first rodeo together didn’t go according to plan, with Team USA finishing a disappointing seventh place in the 2019 FIBA World Cup after a shocking loss to France in the quarterfinals that left the Americans out of the medal rounds.

The pressure mounted on Popovich and the rest of the coaching staff when Team USA lost back-to-back exhibition matches to Nigeria and Australia while preparing for the Tokyo Olympics in Las Vegas last month. Disaster then struck when the Americans lost their opening group match to France, jeopardizing their Olympic campaign.

Team USA recovered though, winning their final two group games against Iran and the Czech Republic. The Americans then recorded incredible come-from-behind wins against Spain and Australia in the quarters and semis before edging past France in the final to win their fourth consecutive Olympic gold medal.

Popovich is expected to quit his post after leading Team USA to the title, leaving the door open for Kerr to take the mantle as the next head coach. Kerr would want nothing more than to see Curry in action for Team USA in Paris in three years’ time.

The list of Stephen Curry’s accomplishments on the basketball court is long and incredible. He has won almost every award there is in the NBA, capturing the title three times and the league’s Most Valuable Player trophy twice. He has been named to the All-NBA First Team four times and has been an All-Star seven times in his career.

The only thing missing from Curry’s illustrious trophy cabinet is an Olympic gold medal which Kerr wants to rectify soon. Kerr believes that is the only box left to check on Curry’s Hall of Fame career. Curry has signaled his intention to play for Team USA in Paris, telling Kawakami that seeing Kevin Durant and Draymond Green winning the gold in Tokyo has given him extra motivation to finally make his Olympic debut soon.