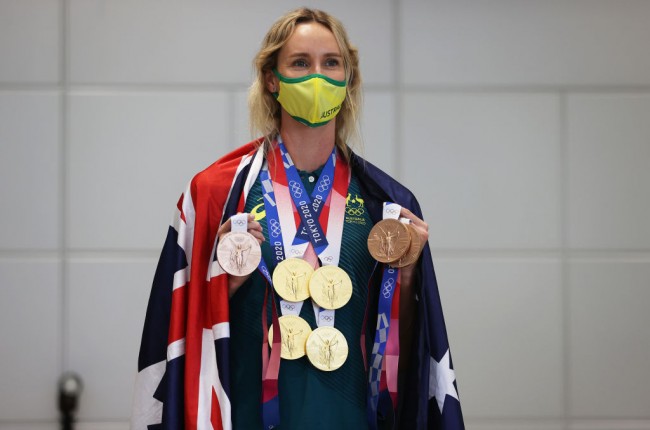 TOKYO, JAPAN – Emma McKeon of Team Australia poses for a photo with her seven Olympics medals after the Australian Swimming Medallist press conference on day 10 of the Tokyo Olympic Games on August 02, 2021 in Tokyo, Japan. (Photo : James Chance/Getty Images)

Two athletes stood out from the 10,305 individuals that competed in the recently concluded Tokyo Olympics, and both of them came from the sport of swimming. Caeleb Dressel and Emma McKeon stamped their class against the opposition at the Tokyo Aquatics Centre, combining for a total of 12 medals to become the most successful athletes in this year’s Summer Games.

Caeleb Dressel arrived in Japan as one of Team USA’s main gold medal hopefuls, and he did not disappoint, grabbing five gold medals. He opened his gold medal account in the 4×100-meter freestyle relay, winning the title alongside Blake Pieroni, Bowe Becker, and Zach Apple as they finished with a time of 3:08.97, the third-fastest in history.

Dressel then won his second gold medal in record fashion, capturing the 100-meter freestyle title with a time of 47.02 seconds, the fastest in Olympic history. Dressel silenced the doubters who said he couldn’t win an individual event in the Olympics, defeating Australian Kyle Chalmers by just 0.06 of a second.

Dressel then stamped his class in the men’s 100-meter butterfly, posting a new world record in the final with a blistering time of 49.45 seconds. Dressel continued his dominance in the men’s freestyle, winning the 50-meter event with 21.07 seconds to capture his third individual gold medal in Tokyo and the fourth in this year’s Summer Games.

Dressel ended his campaign in Tokyo with yet another gold medal, giving Team USA the victory in the men’s 4×100-meter medley relay. Dressel teamed up with Ryan Murphy, Michael Andrew, and Zach Apple to win the gold with a world record time of 3:26.78. Dressel has now won a total of seven gold medals in his Olympic career, making him one of the greatest American swimmers ever.

Related Article: Celebration Erupts in Paris as Lionel Messi Signs With PSG for Two Years; To Wear Jersey No. 30 Again

To say that Emma McKeon exceeded expectations at the Tokyo Olympics would be a severe understatement. McKeon had a fantastic showing at the Tokyo Aquatics Centre, grabbing seven medals in the pool to bring her total haul in the Olympics to 11 medals, more than any other Australian in the Summer Games history.

She eclipsed the record of nine career medals by Ian Thorpe and Leisel Jones with style, winning two gold medals on the final day of the swimming competition in Tokyo. She shattered the Olympic record with her win in the women’s 50-meter freestyle, posting a time of 23.81 seconds to complete the sprint double after her earlier victory in the 100.

Half an hour later, McKeon made it a total of seven medals in Tokyo, leading Australia to victory in the women’s 4×100-meter medley relay. McKeon left Japan with four golds and three bronzes, tying the record for most medals won by a female athlete at a single Games set by Soviet gymnast Maria Gorokhovskaya in the 1952 Helsinki Olympics.