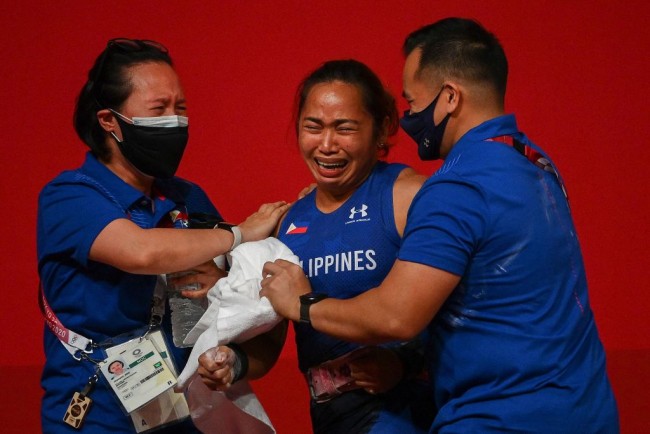 After 16 days of non-stop sporting action, the Tokyo Olympics has finally concluded, leaving billions of people across the globe with a massive hangover. To help ease the sorrow that we feel now that the Olympics is over, we compiled the most memorable moments in the Tokyo Games.

The Tokyo Olympics was a historic Summer Games for three nations as the Philippines, Qatar, and Bermuda finally ended their gold medal droughts this year. After 97 years of pain, the Philippines won the coveted Olympic gold in Tokyo, with Hidilyn Diaz capturing the women’s 55-kilogram title for weightlifting.

Diaz outdueled Chinese weightlifter Liao Qiuyun in the clean and jerk, successfully lifting her final attempt of 127 kilograms to win the gold medal and send millions of Filipinos back home into wild celebrations. Diaz has become an instant celebrity in the Philippines, with the 30-year-old taking home rewards and prizes amounting to over $1 million.

Bermuda became the smallest country to win a gold medal in the Olympics after Flora Duffy triumphed in triathlon. She finished with a time of one hour, 55 minutes, and 36 seconds to come out on top of the 56-woman field and give the tiny island with a population of around 64,000 its first gold and its first medal since the 1976 Montreal Olympics.

Fares El-Bakh also made history in Tokyo as he gave Qatar its first-ever Olympic gold medal in weightlifting. He lifted 177 kilograms in the snatch before setting an Olympic record in the clean and jerk with a lift of 225 kilograms to bring home the gold for Qatar in the men’s 96-kilogram category.

Barshim and Tamberi share gold in the high jump

Unexpectedly, Qatar won its second gold medal just days later in the men’s high jump. Qatar’s Mutaz Barshim and Italy’s Gianmarco Tamberi missed all three of their attempts at clearing the Olympic-record height of 2.39 meters, setting the stage for a jump-off to determine who will take home the gold.

Barshim and Tamberi, who had been perfect in the competition until then, displayed tremendous sportsmanship as the two friends decided to share the gold medal instead. Both high jumpers celebrated after the referee confirmed they could have two golds, a great achievement for both athletes whose careers came close to being ended by serious ankle injuries before the Olympics.

Simone Biles did not win a single gold medal in Tokyo, but the bronze she captured on the final day of artistic gymnastics surely felt like one. Biles grabbed the headlines after withdrawing from the women’s team event due to mental health concerns.

She eventually pulled out of her other individual events due to the twisties, but Biles made a surprise return with her final event on the balance beam. Against all odds, Biles claimed the bronze medal to become the most accomplished American gymnast in Olympic history.